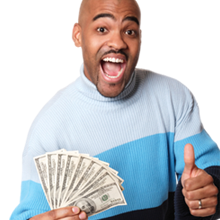 How Much Is Too Much Debt

Nearly everyone has some type of debt. Our consumer-driven society has always encouraged people to live beyond their means. The idea of putting off a purchase until you have the cash to pay for it is a concept most Americans have a hard time grasping.

Up until the financial collapse in 2007, credit was fairly easy to obtain. Nearly everyone could qualify for some type of loan or other form of borrowing. It wasn't unheard of for people to receive numerous offers in the mail stating that that were pre-approved for a credit card that came with a certain line of credit. Lenders actually used to specifically target university students and other relatively young consumers who many times never had any type of credit history or verifiable income.

Those days certainly bear no resemblance to the current economic climate. When the housing and financial markets crashed a few years ago, banks and other lenders immediately tightened their lending requirements. This practice made it extremely hard for anyone except the most creditworthy consumers to meet the new strict standards for borrowers.

Unfortunately, millions of people are still dealing with overwhelming debt that has been with them for many years. Even though it's not in the headlines anymore, foreclosures continue to happen to many hard-working Americans who simply cannot afford their over-inflated monthly payments. A lot of people lost their jobs during this recession and even more now find themselves "under-employed" meaning they earn less than they previously did.

Not a very promising financial picture, to be sure. But it seems the recent turbulent financial situation has actually alerted many people to the importance of not only controlling their debt, but getting rid of it entirely.

Going from fairly manageable debt to seriously overwhelming debt can sometimes happen very quickly. Oftentimes, one unexpected medical emergency can trigger a personal financial crisis- even for those individuals who have health insurance coverage. Medical-related debt is one of the top reasons people are forced to declare bankruptcy.

It is very important that you be aware of your own financial situation and remain alert to signs of too much debt. Most experts recommend doing an in-depth financial check-up at least once every six months to insure that you are on the right track, money-wise. The following statements all indicate you could possibly be headed for a financial crash. If any of these warning signs resonate with you, take immediate action to get things under control. Ignoring financial problems won't make them go away- it will only make them worse.


No one ever consciously sets out to have too much debt. Usually it happens gradually… one poor financial decision at a time. Don't beat yourself up over past money mistakes. Forgive yourself and move on. Taking control of your finances requires patience and commitment but it can be done! The sooner you recognize that you are in over your head financially the sooner you can begin to make lasting, positive changes.